Leading up to the start of the second season of HBO’s hit sci-fi drama Westworld, we’re taking a look at the first season of the exceptional show. We’re going to dive into some major Spoilers, so be warned now, because we’ve got a lot to talk about.

The first episode begins with Dolores (Evan Rachel Wood) sitting in a room to be examined. She’s damaged and has blood on her. And as the camera closes in on her, we hear Bernard (Jeffrey Wright) talking to her about her thoughts. We continue, watching Teddy (James Marsden) ride the train, and enter Sweetwater, the town at the center of the park. Just like all the guests. The hosts treat him as someone new. But Dolores recognizes him. They go off riding together. Teddy and Dolores head back to her home where they find two men who have killed her parents. Teddy kills both of them. As Dolores comes to her father, a Man in Black (Ed Harris) walks up to her. He says he’s an old friend. Been coming here for 30 years. Teddy tells him to leave her alone. Teddy fires his gun at him. It does nothing. He tells Teddy that he never understood why they paired some of them off. Then he realized, “winning doesn’t mean anything without a loser.” And Teddy is a loser. He drags Dolores away. She fights and Teddy shoots trying to stop him. He shoots teddy, killing him. Then takes Dolores to the stable, seemingly to rape her. The next day comes. And Teddy is alive and well on the train again. This is how it works. This is Westworld. A Theme Park where you can do anything and there are no consequences.

We’re introduced to the main players on the staff. Bernard Lowe, leads the programming department that makes sure the hosts, the robots within the park, run according to the way they’re designed. Theresa Cullen (Sidse Babett Knudsen), is the go between for the board of directors for the business operations and the team running the day to day operations. Elsie Hughes (Shannon Woodward), a Program Designer working under Bernard that is tasked with fixing some of the malfunctioning hosts. Ashley Stubbs (Liam Hemsworth), the head of park security, responsible for the safety of both the guests and the hosts. Lee Sizemore (Simon Quartermain), the head of the narrative department, responsible for coming up with the storylines that hosts play out and guests take part in as they interact with the hosts. And last but not least, Robert Ford (Sir. Anthony Hopkins), the co-founder and creative director of the park. 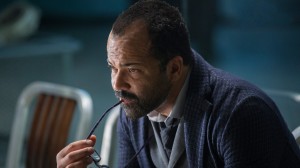 We’re also introduced to a handful of hosts that are part of the central narrative for the park and the season. Dolores Abernathy is a farm girl who lives at home with her mother and her father, Peter Abernathy (Louis Herthum). Teddy Flood, Dolores’ love interest, a gunslinger with a mysterious past. Hector Escaton (Rodrigo Santoro), a bandit that frequents Sweetwater. Clementine Pennyfeather (Angela Sarafyan), a prostitute that works out of the Saloon in Sweetwater. Maeve Millay (Thandie Newton), the madam that watches over Clementine and the other prostitutes in Sweetwater.

The only guest we’re introduced to in the first episode is the mysterious Man in Black. A guest who we learn over the course of the season is trying to find some sort of maze hidden within the park. A maze that has something more to it than just a Theme Park experience. As time goes on we learn that he knows Ford. That he knows this park well. That there’s something more to him than meets the eye. But we’ll dive into that when we look at episode two. For now we see him kill, torture, and scalp hosts to try to find what he wants. By the end of the episode he’s found a diagram of the “maze” hidden on the underside of a host’s scalp.

The episode begins explaining a lot of the finer details of the park. 10% of the hosts have just undergone a major update, and beginning with Peter Abernathy it appears that there’s something wrong with the hosts who were given the update. The core of which may be what Bernard explains are “reveries.” Small elements programmed into the hosts that almost act as physical queues from memories long past. Fake memories put in by Ford, but still yet, memories that help create more to each host’s character. We find out that it’s been 30 years since a “critical failure” at the park, but that there’s worry that one may come soon.

After Peter Abernathy seems to go haywire, multiple other hosts follow suit, including a criminal named Walter and the sheriff of the town. The sheriff’s issues just seem to be a glitch. Walter’s seemed to be a glitch at first, but more is revealed later on. Peter’s issue is more though. After finding a picture in the mud of a woman in times square, which shouldn’t have meant anything to him, he begins to lose his mind. He shows the picture to Dolores who says that it doesn’t look like anything at all, the go to reaction for hosts when they see something they don’t understand. But amidst his freakout he whispers in her ear, “these violent delights, have violent ends.”

“These violent delights, have violent ends,” is a phrase heard a few times over the course of the season. But what never occurred to me before now is that it’s more than just a thought on what the park is. It’s a code. The programmers will sometimes use phrases to make the hosts do specific things. this phrase, is a code to make them turn. To make them start something that opens up their memories, that makes them realize that there’s more to their world than what they see. As the season goes on this becomes very intensely clear.

We’re also introduced to the old storage facility. First when the main team finds that an old host is online in the facility, only to find Ford drinking with a very old host. Then when the Peter Abernathy and Walter hosts are put away and essentially decommissioned. When decommissioned from use in the park, the hosts are put into a large room, one that’s supposed to be kept at freezing temperature, where they stand like mannequins. But something has gone wrong with the cold storage facility and it’s not set to the right temperature. There’s water pouring through the floor of the room and all throughout the sub-level that the facility is located. A sub-level that appears to be an old entryway or old well used area of the entire Westworld facility, but has since been abandoned. Since no one goes there anymore, the fact that water is flowing through and the cold storage isn’t set correctly doesn’t seem to matter to anyone. 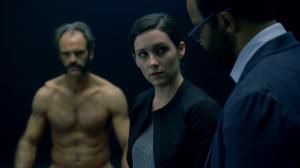 As for the overall issues with the hosts, Ford seems to brush everything off. He says that Peter Abernathy was just remembering old narratives. From when the host robot played a cult leader. They stage a robbery by Hector, where multiple hosts get shot, so that they can  take them to a sub-level and make sure they’re all running fine. Ford tells Bernard that they can do so much nowadays, cure any disease, keep the weakest alive, maybe one day resurrect the dead. He then asks Bernard to forgive him for his mistake with the reveries and Bernard obliges. Dolores tells Ashley that she wouldn’t harm any living thing and is sent back to the park. But in the last scene we see her kill a fly that lands on her neck. Indicating that she’s changed, that she’s going down a path that isn’t necessarily a good one.

The first episode contains a lot, and is really well balanced, well directed, full of amazing performances, but the cherry on top is probably the music. While the show never really uses exact songs, the piano in the Saloon at Sweetwater frequently plays classic rock songs. Sometimes those songs are then melded into the score of the show through orchestral versions. For example, the first episode contains Soundgarden’s “Black Hole Sun” and the Rolling Stones’ “Paint it Black.” But it’s done so in such a subtle way that it never takes you out of the show. It adds to this element of the show that is still a lingering question for the audience. Where are we?

We don’t know for sure yet what time the show takes place in. Is it the future? Is it now? Is it the past? And the show never explains. The show also doesn’t explain just yet where the park is. It’s a multi-level facility, bigger than you can possibly explain. Most fans have theorized that it’s somewhere underground or in the ocean, just due to the sheer magnitude of space necessary for the park and the sub levels. But for now we still don’t have an answer. Hopefully that will be one of the many questions answered in season two.

That’s it for episode one, “The Original,”  but keep following Poor Man’s Spoiler as we examine the rest of season 1 of Westworld. We’ll also provide our thoughts on each new episode when the series returns to HBO on Sunday April 22nd. 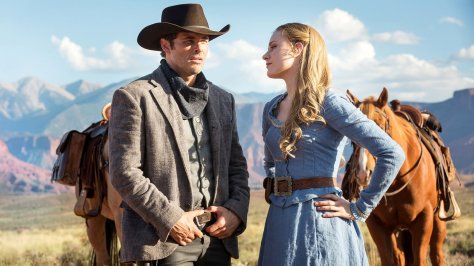