Leading up to the release of Marvel’s Avengers: Infinity War, we’re taking a look back at every element of the MCU thus far. This film is the culmination of everything that began with the first Iron Man film in 2008, and so we want to prepare you for what may be the biggest film of all time. We’ll dive into all 18 films released thus far, each of the TV series that are considered part of the MCU, and a selection of other shorts and comics considered canon within the MCU. Today we start off with the film that kicked off the entire MCU, Iron Man.

The most important thing to remember with Iron Man is that it came out without anyone expecting anything. Not just for the MCU, but also for what it would become. The film was going to star Robert Downey Jr. An actor who had seen some tough times and was slowly rising back to fame with a recurring role on Ally McBeal, and a few cult favorites in Kiss Kiss Bang Bang, A Scanner Darkly, and Zodiac. It was directed by Jon Favreau, who had only previously directed Elf and the Jumanji spinoff Zathura. It was based off a Marvel character that wasn’t a household name. To put it lightly, there was no guarantee here that it would work. But it did. And it still does. We’re going to dive into this by each element.

Tony Stark/Iron Man (Robert Downey Jr.)
The film introduces us to Tony, and gives us the Iron Man origin story. Obediah Stane (Jeff Bridges), the business partner of Tony and his father Howard, works with the Ten Rings terrorist organization to kidnap and kill Tony. During the kidnapping he is hit with shrapnel that is stuck in a point near his heart. It can’t be removed as the surgery could kill him. But it’s moving closer to his heart ever so slowly. The only way to keep him alive is through an electromagnet on his chest. He creates an arch reactor for his chest to keep him alive. And when the Ten Rings ask him to build a weapon for them he uses the material to build the first Iron Man suit. He breaks out and goes back home with the help of a man named Yinsen (Shaun Toub), whom he had met in passing years ago. Yinsen dies, and he vows to make sure that he did not die in vain.

Tony heads home, decides his company will not make weapons anymore, and begins building a working Iron Man suit. By the end of the film he creates the fully functional suit and discovers that Stane was behind his kidnapping. Stane makes a suit of his own, the Iron Monger, and they battle at Stark Headquarters. Tony defeats Stane, and at a Press Conference where he’s supposed to be confirming an alibi for himself, he admits he’s Iron Man.

Pepper Potts (Gwyneth Paltrow)
Pepper begins as Tony’s personal assistant. There’s a bit of sexual tension between them, which Tony leads into heavily. But every time he tries to take steps forward, she reminds him that he’s too self centered. Pepper helps Tony not only as an assistant but as his closest ally. She helps him replace the arch reactor in his chest. She helps find evidence that Stane is working with the Ten Rings. She also helps lead Agent Coulson and SHIELD to arrest Stane. Tony may be the man in the suit, but in a lot of ways, Pepper is the one with all the power. By the end of the film, Tony seems to have changed ever so slightly. And there’s an indication that something may happen between them. 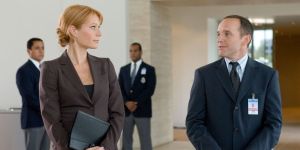 Agent Phil Coulson (Clark Gregg)
Coulson is introduced as an Agent of the Strategic Homeland Investigative and Enforcement Logistics Division. SHIELD. This is the first piece to the bigger Universe. And throughout the first Phase of the MCU, SHIELD is the connective tissue. Especially Coulson. He is the thing that really helps bring it all together. And the first Iron Man film sets him up perfectly, as a sweet, but tough secret Agent for the government group responsible for handling Superheroes. 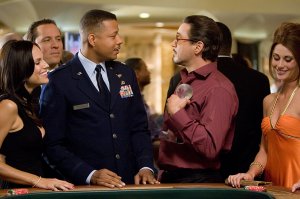 Lt. Colonel James “Rhodey” Rhodes (Terrence Howard)
Tony’s best friend, and the liaison between the US Air Force and Stark Industries. In the first film he’s set up to be another voice of reason in Tony’s life with an indication that at some point he will suit up as well.

JARVIS (Paul Bettany)
Tony’s personal AI system that helps him coordinate everything he creates. Jarvis is also the operating software inside of the Iron Man suit and reports to Tony on the suit’s status.

Happy Hogan (Jon Favreau)
Tony’s chauffeur and bodyguard. At times used as a comedic relief in the film. In the comics Happy not only takes these roles, but also becomes a superhuman known as Freak.

Captain America’s Shield
A Prototype of the shield is seen in Tony’s workshop when Pepper finds Tony getting out of the Iron Man suit.

Nick Fury (Samuel L. Jackson) and the Avengers Initiative
After the press conference and the credits roll, Tony comes home to find Nick Fury. “I am Iron Man. You think you’re the only superhero in the world? Mr. Stark, you’ve become part of a bigger universe, you just don’t know it yet.” Tony asks who he is. “Nick Fury, Director of SHIELD. I’m here to talk to you about the Avengers Initiative.” With that the MCU truly began. It wasn’t just about Tony, it was about the entire Universe. SHIELD, Thor, Captain America, Black Widow, all of it was out there waiting. And Tony just opened the flood gates.

So what comes next? The Incredible Hulk. The film that in many ways is the least connected to the MCU as a whole, and the only film in Marvel’s Phase One that didn’t get a sequel. (Even the sequel in phase one got a sequel before Hulk!) But we’ll get to that next time.

Keep following Poor Man’s Spoiler for all of our Countdown to Infinity, leading up to the release of Avengers: Infinity War on April 27th!

15 thoughts on “Countdown to Infinity: A Quick Look at Iron Man  ”