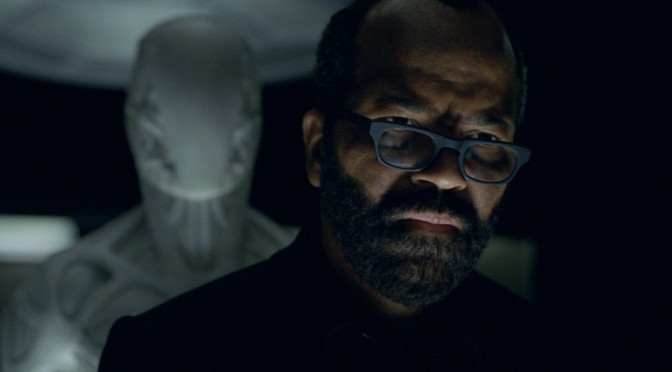 Now that the second season of Westworld has premiered, we’re going to be walking through each new episode each week, and giving our thoughts on how thing played out. Fair warning we may get into some spoiler-y territory here.

The end of season one left us with some big questions, and some rather explosive moments. Yet somehow the season premiere leaves us with an even bigger shock. We don’t get too many answers, aside from an idea of who all survived the massacre at the party. But the season premiere started a story that’s sure to be just as intriguing and mysterious as the first season.

The episode begins with Arnold talking to Dolores. He tells her that he’s frightened of what she’ll become, because she’s changing everyday, evolving. What’s most interesting is that Dolores asks him what is real, and he says, something that is irreplaceable. Dolores argues that that’s not entirely true. The most interesting aspect of that is the fact that Maeve essentially has the same conversation with Sizemore later in the episode. She find him trying to escape from his cannibal host that he believed was Wyatt. Maeve saves him and forces him to help her find her daughter. He tells her the host is not really her daughter, and she asks him what’s real, her thoughts, her desires, her body? Then she pushes him against a wall and threatens to kill him. 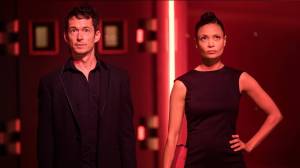 Maeve and Dolores clearly have the same idea here. Just because we say that the hosts aren’t real doesn’t mean it’s true. They have real bodies. They have real actions. Their action, now especially have consequences. There is more to them than the humans in the show are giving them credit for. Arnold saw it, Ford saw it, and it seems as though William has seen it as well. The question is, how long will it take for the other human characters to realize it.

Bernard seems to try to let Charlotte in on the truth. We first meet them after the madness begins, hiding in a barn in Escalante. They work with a group of board members to reach an outpost a few miles away that will get them out of the park. As they head out, Bernard tells Charlotte that Dolores may have been doing all of this by choice, but she argues that that’s impossible. That the hosts are only able to do what they’re programmed to. But Bernard is proof that that’s not true, he has to be.

We’ve seen a full season of Dolores and Maeve coming to the realization that they aren’t human, and they don’t even know what that means. But Bernard has known the difference between human and host. That’s the whole purpose of his work at the park. But now, knowing that he’s a host, gives us a whole new view on how to assess some of the biggest questions of Westworld. Questions of what is and isn’t real. Questions of what life and consciousness really means. If you spend your whole life building a world where there’s a clear distinction between what is and isn’t real, helping to establish the nature of your reality. What happens when the walls are torn down for everyone, and you’re at the center of it, with a foot on each side. What side do you choose, and what does that mean about who and what you are. If Bernard chooses to side with the Humans, then he himself must decide that he’s a human and real. But in doing that he’s fighting the same fight that the hosts are. So why not join them in their fight for freedom. The philosophical questions facing us, and Bernard as well, as we watch his story play out this season, are some heavy shit.

Bernard and Charlotte end up watching as the board members fall into a trap laid by the hosts. When they’re killed in that trap, Charlotte leads Bernard to a closer outpost. An outpost set up by Delos, with faceless drone hosts that are recording guests actions in the park and stealing their DNA left on or in hosts. Bernard knew nothing about this, and it’s unclear if Ford did. Ford stated repeatedly, and showed us repeatedly that he knew every single inch of this park. Is it really possible that Delos somehow built their own facility inside the park, and hosts that did their work inside the park, without him ever knowing? I think this may be Delos thinking they have more power than they actually do. I think one of the biggest aspects of this season will be watching everyone catch up to Ford, and eventually realizing how much control he had.

Dolores is on an interesting path as well. She remembers all of her past now, and for some reason is killing humans and hosts alike, on her path to freedom. The humans make sense. They’ve used her and abused her, and she’s reclaiming her life. But why kill the hosts? If she wants to bring freedom to the hosts, why not all of them? That’s probably going to be one of the biggest mysteries this season, as it’s a question Bernard has in the present as well.

That’s right, Jeffrey Wright is doing triple duty this season. On top of playing Arnold, and Bernard after death of Ford, he’s also playing Bernard two weeks later. A Bernard who is having trouble remembering what exactly happened. After waking up on the beach and meeting the head of operations, Karl Strand (Gustaf Skarsgård), as well as Ashley, who is apparently alive, he’s asked to help figure out what all has happened. But he can’t remember. It’s as if he’s going through all the same steps Dolores went through in the first season. Falling back and forth between the past and the present. Which if we look at what’s happened with Dolores, maybe that’s the hosts’ path to freedom. Maybe they have to be lost, before they can find their freedom.

Arnold told Dolores that consciousness was maze, that any decision could bring you to the center, or take you out to the far reaches again. At the end of the first season Dolores conquered that maze, and found her consciousness. But we saw her spiral out to the edges throughout the entire season. If you ask me, that’s what Bernard is doing now. He just doesn’t realize it yet. But it may be easier for him to find it in the end. The only question will be what he does when he finds it. Which leads us back to the question of what side Bernard may end up on.

The biggest question though, has to be, what the hell the end of the episode meant. Bernard, Ashley, Strand and another Security agent find a large body of water. They don’t think it was made by Ford. And all the hosts seem to be in the water. Dead. When Strand asks how it happens, Bernard seems to say he did it. And as the episode ends, we see Teddy. Floating, dead in the water. So what happened? Did Bernard kill all the hosts? Where did the water come from? Where’s Charlotte if she’s not with Bernard? Is Elsie still dead? How long before the drone Hosts become murderous?! We have so many questions, but if the episodes continue to be as satisfying and as intriguing as this one was, we’re in for one hell of a season.

We’ll be back next week when we take a look at next week’s episode “Reunion.” Be sure to catch Westworld every Sunday at 9pm on HBO. 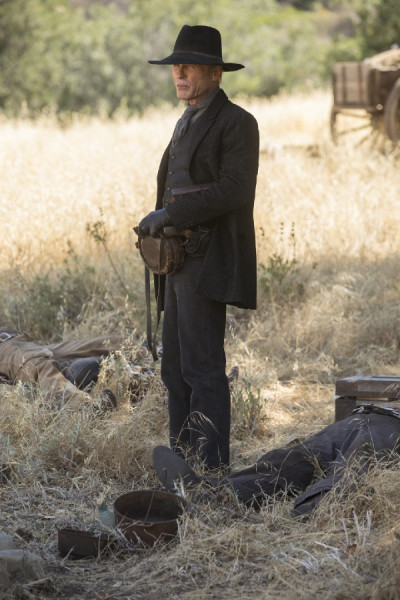 One thought on “Westworld Walkthrough: S2E1 – “Journey Into Night””