Everyone expected to see some cameos in Solo: A Star Wars Story. But what we got was a cameo that no one saw coming. This is a major spoiler. One that if you haven’t seen the film, you may not want ruined in any way shape or form. So I would suggest waiting until you see the film to keep reading. But if you’ve seen the film, or don’t care at all about spoilers, feel free to move forward.

At the end of Solo, Dreyden Voss (Paul Bettany) is killed by Qi’ra (Emilia Clarke), and she leaves Han and Chewie on the planet Savareen after speaking with Dreyden’s boss. Dreyden’s superior, and the leader of the Crimson Dawn is revealed to be Darth Maul. Yes, THE Darth Maul, who was cut in half by Obi-Wan Kenobi in Episode 1. How did this happen? Who plays the character? What does it mean moving forward? Let’s dive in.

Having lost his mind to his rage, Talzin helped return his sanity and gave him a pair of cybernetic legs. From this point on Darth Maul was cast out from the Sith by Darth Sidious (re: The Emperor). And began building an evil criminal empire of his own. That went through waves of success and loss, eventually in the timeline, Darth Maul would meet Obi-Wan on Tatooine and have one final battle. Obi-Wan would defeat the former Sith Lord, but Maul would find peace in knowing that the boy Obi-Wan was protecting would bring balance to the force and wipe out Sidious and the Sith. Achieving vengeance for what Sidious had done to him. 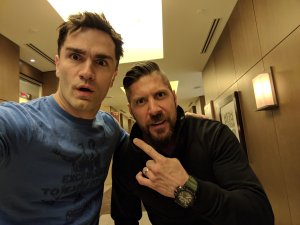 What now?
There’s no confirmation as of yet for where we will see the character next. There’s essentially 7 options here. The most likely option is that Darth Maul shows up in another “Star Wars Story” and becomes the connective tissue between multiple films. That could be in a sequel to Solo, or the just announced Boba Fett film, which itself may be a sequel or Spin-Off from Solo. There’s also the option that he’s in Episode 9, which is set to release next year, but that feels incredibly unlikely as it would change the flow of the timeline as it stands. Why reinforce the idea that the animated series’ are legitimately canon by bringing him back, only to show him still alive decades after he died in said series. There’s also two separate trilogies currently being developed. One by Last Jedi director Rian Johnson, and another by David Benioff and D.B. Weiss, the guys behind Game of Thrones. There’s also a live-action TV series coming from Jungle Book director Jon Favreau, who also provided the voice for Rio Durant (the four armed pilot) in Solo.

The last option, which honestly would not surprise me in the least, is that we see Darth Maul pop up in some other film. Maybe an Obi-Wan film, where we see their final battle play out on the big screen. Or maybe a completely different film either about him or some other element of the Star Wars Universe. No matter what though, I would bet everything I have that this is not at all the last we’ve seen of Darth Maul on the big screen. Disney and Lucasfilm would never bring him back into the films, only to show him for two minutes of screen time, after years of fans begging for more of the character, and not use him in a bigger role later on. It would be like JJ Abrams showing Luke at the end of Episode 7 and then picking up Episode 8 without ever seeing him again.

Solo: A Star Wars Story is currently in theatres. You can read our Spoiler free review here.