Ask anyone who has watched the Marvel Netflix shows and they’ll tell you Iron Fist Season 1 is the bad one. Every other series has been outstanding on one level or another, but there were a lot of issues that plagued the introduction of Iron Fist. The character grew a bit more with Defenders, and when used in the second season of Luke Cage, we finally saw the Danny Rand fans know and love. The new season is without a doubt a step up from the first season, but it does still have some flaws.

The biggest issue that plagued the first season of Iron Fist is that it was not structured like a regular Netflix show. There were too many times where the show worked like an average TV show, constantly retreading on exposition. In the Netflix era, it’s become known that a show is usually watched a season at a time, with the audience knowing exactly what happened in the previous episode. But traditionally, a television show is expected to find a way to easily reiterate the events of the previous episode. Iron Fist Season 1 constantly reiterated the events of previous episodes to the point where it felt like a show just constantly recapping itself. It worked much better when watched in spurts, but binging the whole season made the show nearly unwatchable.

The new season doesn’t retread on previous events and packs plenty of interesting material into each episode, thanks partially to a 10-episode order. The show barely ever stops and keeps pushing forward towards a really intriguing conclusion. In a lot of ways, the second season is everything the first season should have been. There’s a compelling villain, an interesting secondary villain, fantastic character development, and a good story to bring it all together.

This season of Iron Fist also shows that the team behind these shows has truly learned how to keep the season well-balanced. Instead of splitting the season into two halves with the hero taking down one villain each half, this season intertwines the stories in a natural way. It gives a slow burn to the secondary villain and, in the end, brings a much more satisfying ending to the character’s story this season.

The villains this season also helped elevate the material in a major way. Davos is in some ways the Killmonger of the Netflix shows. You see his point, and he’s doing what he thinks is right, but in the wrong way. There’s a lot to be said for Sacha Dhawan’s performance as Davos as well. He has an incredible charisma and gives a performance that pulls you in completely. Alice Eve also does a phenomenal job as Mary Walker, aka Typhoid Mary, this season. Her performance as Mary and the show’s portrayal of dissociative identity disorder is perfection. It would be very easy for an actor to play this part in very silly and ridiculous way, but Eve and the team behind the show do a fantastic job of showing the truth of this disorder and not making it just a gag or something to be laughed at.

Iron Fist’s second season isn’t perfect, and honestly, the supporting cast at times outshines Finn Jones’ Danny Rand. But it’s definitely something worth checking out and is a major step up from the second season. Without giving anything away, I’ll also say that the end of the season leads to what could be a truly spectacular season 3. I’ve loved all of the Marvel Netflix shows, but no ending has made me want another season as immediately as the end of Season 2 of Iron Fist. The day they announce a season 3, I will be jumping up and down and counting down the days til its release.

You can catch both seasons of Iron Fist now streaming on Netflix. 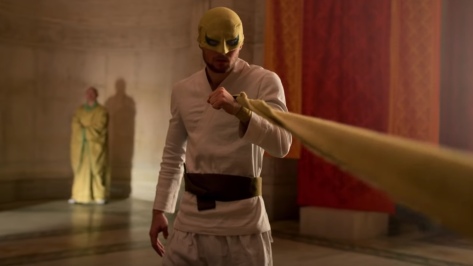