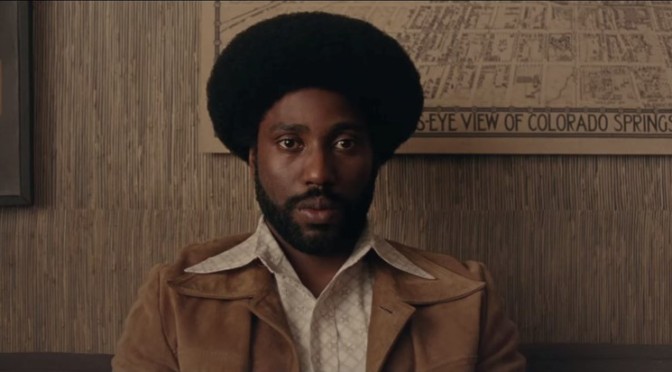 We’re looking at each of the Oscar Nominees for Best Picture this week. Today we take a look back at BlacKkKlansman, a film that undoubtedly deserves every single nomination.

During the 1970’s, Ron Stallworth, a black police officer with the Colorado Springs Police Department, successfully infiltrated the local chapter of the Ku Klux Klan. He worked undercover with a white police officer who would go to meetings and ceremonies in person, but Stallworth would cover any communication over the phone. During the investigation, Stallworth was able to get in contact with the leader of the Klan, David Duke, and speak with him over the phone. This helped expedite his membership into the Klan and establish his legitimacy during the investigation. These events actually happened and are now the subject of Spike Lee’s latest film BlacKkKlansman.

The film is a gripping, smart, funny, drama that keeps you hooked the entire two plus hours. There are plenty of moments where you’re uncertain if Stallworth (John David Washington) and his partner Flip’s (Adam Driver) cover will be blown, with the film constantly keeping the audience on their toes. On top of infiltrating the KKK, Ron also begins a relationship with Patrice (Laura Harrier), the president of the Black Student Union at Colorado College. The two meet at the beginning of the film when Stallworth is assigned to go undercover at a rally hosted by the Black Student Union. As Stallworth does his work to stop the Klan, he also hides his job from Patrice who believes all cops are pigs.

The film does an excellent job with showing the drama and intensity surrounding the investigation. However, it does falter at times when it comes to Stallworth’s relationship with Patrice. There are plenty of important moments between the two of them where she calls into question the integrity of police in a time where Black people are getting shot and killed in the street. But the film doesn’t do much to help Stallworth support the idea that cops can be good, which is a bit bittersweet. We see throughout the film that the cops aren’t completely innocent. There is a single officer who takes the brunt of the “corrupt, racist, asshole cop” role, which helps support Patrice’s argument. The end of the film helps show that there is larger network of corruption and racism at play. But Stallworth never pushes on the argument with Patrice. He never seems to give true effort into defending police, which feels like Spike Lee is saying there is no good side here and that police aren’t redeemable. This is a fine point to make, but if the only point of the relationship with Patrice is to point out the issues with police to a police officer, why include it? It begins to feel forced and starts to pull away from the flow of the rest of the film.

The rest of the film works magnificently. There are plenty of moments where you are honestly scared that Adam Driver’s Flip is going to be found out and potentially tortured and killed by the Klan members. The dialogue between Stallworth and Duke (Topher Grace), as Duke is duped by Stallworth’s portrayal of a white man over the phone, is hilarious. There’s an interesting element of this as well, because it never gets old. The joke is constantly funny due to its irony and ridiculousness. But towards the third act of the film, there’s a scene where the two are talking. While Stallworth’s voice remains engaged and on point, the expression on his face tells us more. He’s sick of playing this game. He’s sick of hearing these insults, and the numerous derogatory terms. He’s tired of the racism, and bigotry. He’ll play along in whatever way he has to, but there’s just a voice and a blank stare. The moment is without a doubt one of the highlights of the film, and shows that Washington, just like his father (Denzel Washington), is an actor with enormous talent. 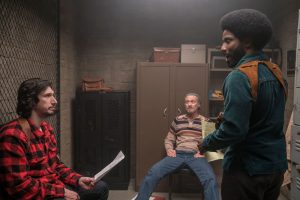 The rest of the cast is fantastic as well. Harrier does a great job as the steadfast activist. Driver gives one of his best performances to date, as does Grace, and the ensemble of Klan members is horrifyingly frightening in the best ways. There are some classic Spike Lee moments: a lot of close ups, some quick cuts to material referenced by characters, and very direct use of score. However, the majority of the film plays out without it feeling like a Spike Lee film, which isn’t a good or bad thing. In a way, you expect certain things from a Spike Lee film, but sometimes those elements can take you out of it. I’d say the film benefits from it having less of his trademarks, as it’s something that you want to get lost in. There were plenty of moments in this film where I felt scared for the characters, as if I were watching these events play out in real life. That type of thing doesn’t happen much in film, the ability to pull your audience in in that manner. It’s only possible when you have a director who is at the top of their game, which Lee is without a doubt.

The end of the film, which we won’t spoil here, is shocking. It’s a reminder that the world we live in today isn’t so different from the world Stallworth lived in back in the 70’s. These evil villains who you want to see lose at the end of the film, are real people who are still alive and still have power today. They are real people who don’t feel that they need to hide behind masks and hoods and the term “the organization.” Real people who have used the words, “America First,” and “Make America Great Again,” for 40 years. The film isn’t just an entertaining “comedy/drama.” It’s a reminder of who we are. What we are capable of. And what evil truly lurks in this world.