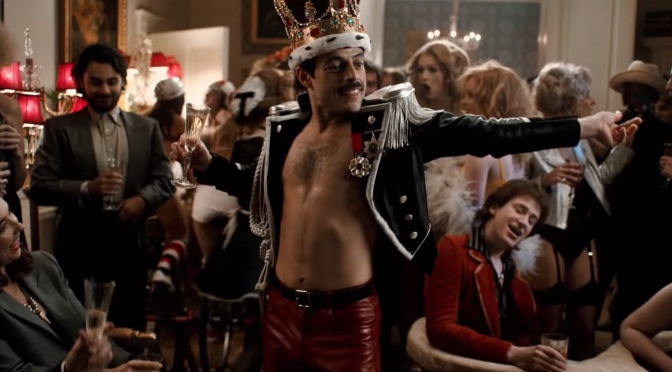 Bohemian Rhapsody is nominated for five Oscars at the 91st Annual Academy Awards, including Best Picture. So we decided to talk about it.

Bohemian Rhapsody was a film long in the making. It’s one that has had numerous directors and stars attached to it, and in the end, came down to Rami Malek starring as Freddie Mercury with Bryan Singer taking on the role of director. Normally we would talk about the highs and lows of a film–how the film deserves recognition or attention. In a way, we’re going to do that today, but not in the usual way we talk about movies. Today we’re going to take a look at the two most significant aspects of this film: Rami Malek and Bryan Singer.

First up, Rami Malek. His performance as Queen’s frontman, Freddie Mercury, is insanely on point. In every moment of this film, he is giving his all. He commits to every high and low of the character, and we feel for him throughout. There’s never a point in the film where it’s Malek; it’s always Freddie. When he’s riding the highs of being on stage performing Queen’s greatest hits, he’s Freddie. When he’s at his lows, looking through a window for one other person to connect to, he’s Freddie. Malek gives one of the best performances of the year, and that performance elevates the film from VH1 biopic to Oscar-worthy feature.

Now, let’s talk about Bryan Singer, the director of beloved films such as The Usual Suspects, X-Men, and Valkyrie. Singer also produced multiple TV series, including House and the X-Men TV series Legion and The Gifted. He was hired to direct Bohemian Rhapsody and subsequently fired when Fox shut down production on December 1, 2017 after having issues with Singer’s work and behavior. At the time he stated that he was leaving the project due to Fox not allowing him the time necessary to help a “gravely ill parent.” But there seems to be more to the story, as at one point, actor Tom Hollander briefly stepped away from the film due to Singer’s behavior. It’s also been rumored that Singer clashed with Rami Malek, potentially over creative differences. Regardless of what happened, Singer did not finish directing the film, and it is reported that director Dexter Fletcher finished the film.

Since then, allegations of rape and child molestation have resurfaced, and new reports have reaffirmed some of the suspicions surrounding Singer. The Atlantic released a damning report last month with accounts from multiple victims of Singer’s abuse over the years and have reaffirmed what has long been rumored. The article explains that Singer has often used his power and privilege to seduce young men and manipulate them into partaking in sexual activities with him and other men. Again, Bryan Singer is an alleged rapist and child molester.

There were thousands of people who worked on Bohemian Rhapsody. There’s a good chance that many of them did not want to work with Singer and that many of them were not fans of him for a variety of reasons. Until you know the truth about someone, it can be hard to determine what’s fact and fiction in Hollywood. We live in a day and age where everyone has a camera in their pocket and can immediately post a picture of someone just living their life and say that they’re doing something that isn’t true. We see headlines about people “drastically losing weight” or “possibly cheating on their spouse” just because one person saw someone famous doing something unexpected of them in public. That makes it harder to judge what’s real and what’s not with those in the public eye. We also live in a culture where we’re only just now beginning to acknowledge and truly condemn powerful men who do inappropriate and heinous things. I don’t blame anyone who worked on Bohemian Rhapsody for Singer’s actions, unless they helped him do more harm or looked past allegations they knew could be true.

Singer is not the only person who made Bohemian Rhapsody. He likely had little-to-no interaction with 90 percent of the people who helped create that film, so to condemn the film almost feels like condemning the work of all of the innocent people who were just trying to create a good film about a beloved band. But this is the struggle with determining where things lie between Art and Artist and where we have to separate how we look at a piece and how we connect it with the person who made it. Sometimes that’s easy to do. I still enjoyed Deadpool 2 despite TJ Miller’s inclusion, when at the time of that film’s release, Miller was in the midst of allegations of sexual abuse and had called in bomb threats “as a joke.” But at the same time, I was going to do a retrospective on House of Cards for this site before the final season, and I couldn’t watch the previous seasons to do so because seeing Kevin Spacey made me sick to my stomach.

So where does that leave us? It leaves us with two points: Rami Malek and Bryan Singer. Malek is an incredibly talented artist who gave his all on screen in the role of a lifetime. He took a role that if done poorly, could have ended his career. Instead, it landed him an Oscar nomination; no one can argue against that. Then we have Bryan Singer, a possible rapist and child molester, who directed all but three weeks of principal photography. He likely had no input on the final product or any post production involved in the film, which means he wasn’t in the editing room or at reshoots or there for ADR (re-recording dialogue after a movie is filmed); the final film isn’t truly his to own.

So can we support this film knowing that the final product isn’t Singer’s? Or do we still condemn it given his involvement? I don’t know that we can give a concrete answer here. For now, we have to go on what feels right by us individually as audience members and as good, decent people. There are elements of this film that work really well. Some of those elements had to be formed in post production, and some of them may have been created after Singer departed.  But we don’t know. For now, all we can do is decide how we feel individually, and go from there.

Personally, I don’t have an answer yet, and I don’t know that I ever will.

Written by Alex Lancaster
(Alex is a life long film fan, and has dedicated his life to watching, making and obsessing over films. His favorite film is Big Fish, and he despises Avatar. He has a 4 year old son. And a bad habit of saying more than he needs to. Follow @alex5348 on Twitter.)