The Mission Impossible franchise returns with quite possibly it’s best entry yet.

The MI films follow Tom Cruise’s Ethan Hunt as a member of the Impossible Missions Force (IMF), an espionage agency tasked with handling the dangerous missions which usually revolve around saving the world from certain destruction. The series has always been important to Cruise as the original installment was the first film he produced and as a result he constantly strives to up the bar on each film in every way, and it shows.

After a disappointing second film, Cruise hired J.J. Abrams to direct the third installment, which turned things around and has led to a string of successful sequels. Fallout has in turn raised the bar higher than expected and is not only the best in the series, but one of the best action films of all time.

Most of the MI films have been rather disconnected, much like the James Bond films. Never exactly relating to anything from previous franchises, aside from returning main characters like Simon Peg’s Benji Dunn and Ving Rhames’ Luther Stickell. That’s never been a bad thing, but the past three films have worked to change things up a bit by continuing certain aspects from the other films.

For Fallout, Cruise and McQuarrie have created a film that is a direct sequel to not only the fifth film (Rogue Nation), but essentially to the entire franchise as a whole. There are nods to every film, be it through story, location, shots, stunts, or dialogue, and overall the film is stronger for it.

The film’s only fault is that it doesn’t bother explaining details to some of the characters at first. After two years it’s hard to remember if and what exactly Ilsa Faust’s (Rebecca Ferguson) role was in Rogue Nation, but it’s not incredibly off putting. It’s known that they worked together in the past and she was supposed to get out, now she’s back and all of that is stated clearly and naturally.

The film doesn’t worry about exposition as much because it doesn’t need to. Obviously this is the sixth installment of the franchise, and at this point we know what we’re getting into. But on top of that the setup for the film is so masterfully crafted there’s no dialogue needed to explain what exactly is going on with each character.

Fallout uses a natural progression to help build a perfect narrative, which is expected from a Mission Impossible film, but it’s all too smooth. There are twists and turns, but they’re almost predictable. Then at the midway point, the other shoe drops and the film takes a winding car chase style-path to its thrilling conclusion. Aspects of the film are mildly predictable twists. But even knowing what’s coming or finding out along the way, the journey to get there is completely worth it and incredibly enjoyable. 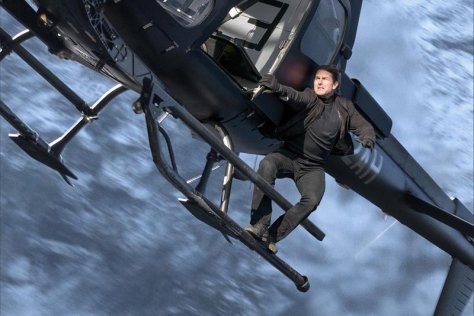 There isn’t a single moment of the film that isn’t enjoyable. It’s funny and full of amazing action sequences, there are some fantastic stunt sequences, and even the “craziest” moments fit perfectly into the story itself. At times that was a slight downfall to the series. As Cruise pushed to have one or two major stunts in each film, those moments almost take you out of the film. It feels like Cruise realized in recent years that he doesn’t need to do that anymore.

Most of those moments in the last few films have taken place in the first twenty minutes or so of the film, so you get your money’s worth right away, and it doesn’t pull you out of the story later. But with Fallout, those sequences are a completely natural part of the story. I can’t tell you what the big stunt is for this film. I could give a few ideas, but overall it’s a smooth ride throughout with ups and downs. There are major stunt sequences. But none of them ever scream “hey this is the major stunt sequence.”

In a way McQuarrie almost comments on this as well for one sequence at the beginning of the film where Ethan Hunt and Henry Cavill’s August Walker jump out of a plane. Hunt tries to give Walker a pep talk about the jump, and Walker blows him off and just jumps. It’s as if McQuarrie and Cruise are finally saying, look this is going to be a moment, but there’s more to it than that. There is more than just the jump and fall in the sequence and it helps move the story along, adds to the character development, and creates for a nice comedy bit. In a way this scene isn’t the major stunt scene anymore, it’s the film’s thesis. You’re going to see action, but you’re about to see two plus hours of so much more than that.