Tim Burton’s live-action Dumbo is officially in theaters. Check out our thoughts here!

Disney has found major success in remaking their classic animated features in live-action format. The latest entry in live-action remakes is Tim Burton’s Dumbo. Based on the 1941 animated feature, Dumbo centers around the Medici Circus (which is coming off of hard times) when they buy a giant Indian elephant who is about to give birth. Everything changes when they discover that the new baby elephant can fly thanks to his enormous ears. The film essentially uses elements of the original film to set up the first act before taking the story into larger territory.

The main focus of the film is the Farrier family. Holt Farrier (Colin Farrell) was once the star performer for Max Medici’s (Danny DeVito) traveling circus. Farrier was forced to leave the circus and fight in World War I, and he returns to the circus without an arm. The home he left is torn apart from dwindling ticket sales and the loss of nearly half the performers after many of them died from the flu. One such performer was his wife, leaving him alone to take care of his two children, Milly (Nico Parker) and Joe (Finley Hobbins). Holt does his best to reconnect with his children, but his attempts fall flat as they seem to want different things, especially his science-loving daughter.

Medici puts Holt in charge of the elephants at first, leading to his kids warming up to the new baby elephant. They quickly discover the elephant can fly, and he becomes an immediate money-maker for the circus. The magical flying elephant brings the attention of V. A. Vandevere (Michael Keaton), an entrepreneur who wants to bring Dumbo and Medici’s circus to New York where the flying elephant will be the main attraction at his theme park. The Farrier children work to get Dumbo to fly so that they can make enough money to reunite Dumbo with his mom, who was sent away when she inadvertently caused the death of an evil elephant wrangler in the circus.

The film is well-paced and follows the beats you’d expect it to for the most part. There are some great performances by Farrell, DeVito, and Parker in her first acting gig. Eva Green also does a great job as Colette Marchant, a trapeze artist from Paris and Vandevere’s girlfriend. The film has some clever nods to the original animated feature but never anything that’s overbearing or out of place in this story. While the film is directed by Tim Burton, it feels less like his usual darker fare and is much more of a light-hearted family story.

Overall Dumbo is mostly what you would expect from a live-action adaptation of the classic film. It’s got a few more story beats to give the whole thing a solid plot. It’s full of heart but will also tug at the heartstrings. It’s not exactly a feel-good film, but it’s not depressing either. It almost has a sort of muted feel to it at times, just as the original film did. But there’s a good story here of the difficulties of parenthood and the importance of trusting our children.

The film also does a good job at showing the female characters in a strong and empowering light without ever making a big deal out of the fact that it’s doing so, which is always a good thing. Nico Parker is practically the star of the film, as the person who helps take care of Dumbo the most and trains him to fly on command. She’s also the heart at the father/daughter story with Farrell’s Holt. You feel for him, but you also see how much she wants to be seen by him and everyone around them. You want her to be happy and to succeed through all of it. That’s a lot of weight for a first-time actress to carry, but Parker does an amazing job and is definitely going to become a rising star in the coming years.

Dumbo isn’t necessarily a “must see” film, but it’s a fun, family-friendly film–one without ties to a large cinematic universe. It’s a film that doesn’t ask anything of its audience except to be entertained, and there’s nothing wrong with that. Sometimes we need more of that in a day and age where everything is a sequel or a spinoff or something we have to be seriously invested in for every frame. Dumbo is the type of movie that you can walk into, spend two hours with it, and leave feeling good and entertained. And sometimes that’s all we need.

Dumbo is currently playing in theaters. 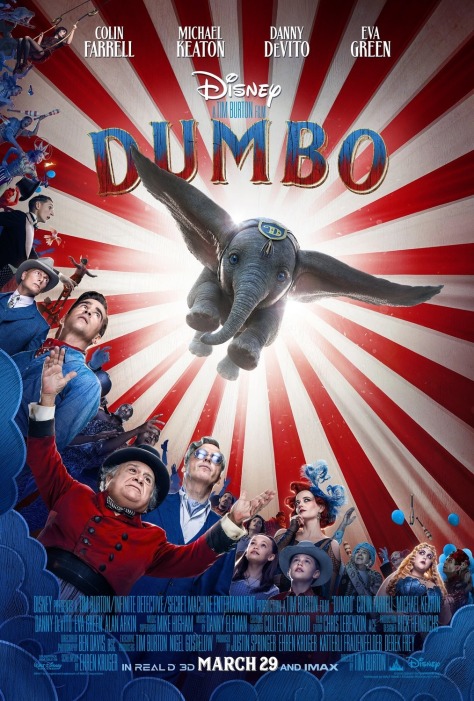