John Wick is back! Check out our thoughts on the film here.

This is the first of the series that I was fortunate enough to see in theatres. The precision and artistry that I mentioned in my previous articles was delightful to see on the big screen, and I will always enjoy the sound design of a good movie. And I do mean good. That isn’t to say that the movie did anything wrong or didn’t meet the level of expectations set by the previous films…but that’s all it did. Good?

The stage for this movie was set in the previous film, so we open up right where we left off: 14 million on John Wick’s head and no one can help him. It’s a great thing we still have the entirety of a movie left or I’d be worried. From there it is just nonstop action and cameos of aging actors who briefly served their purpose and exeunt stage left pursued by a dog. The only character that really shined from these additions was Mark Dacascos, who stole every scene he was in. No one else really made an impact.

The antagonist, once again, is someone who thinks that messing with John Wick is a good idea. Easily the most awkwardly hubristic character in a fair amount of time. A chessboard becomes a focal point in one of the scenes and I think that, intentionally or otherwise, it became clear to me that we are watching a game of chess where two respective kings are doing absolutely nothing while the pieces they control continue to kill each other. Which is a great way to illustrate their power and influence but really boring and inconsequential when it adds up to setting up another chapter.

I guess my real problem with this movie is it falls into the pitfall of my rage against every other sequel: why does this story need to be told? For this movie, there is a clear reason in the beginning, but it just becomes befuddled with obvious setups for things later on in later additions. How did the movie go from “John Wick is on the run from every major assassin in the world”  to “John Wick does what he is told to further move things along?”

I suppose, much like John Wick, I got what a wished for, but this djinn’s wish told me more about the world they exist in to a point of stupidity. It’s like seeing how Jason comes back from the dead or the mechanical failures of Bruce the shark…the magic is gone.

Despite my grievances, I’m not going to rank this lower.  It did continue to hold its place where they set the bar, and for that, I cannot knock them. I’m just disappointed that they couldn’t continue to push the envelope. Oh well; I suppose this franchise will just go on to Die Hard its way into a joke too.

John Wick: Chapter 3 – Parabellum is currently in theaters everywhere. Be sure to check out our reviews of the first two films at the links below. 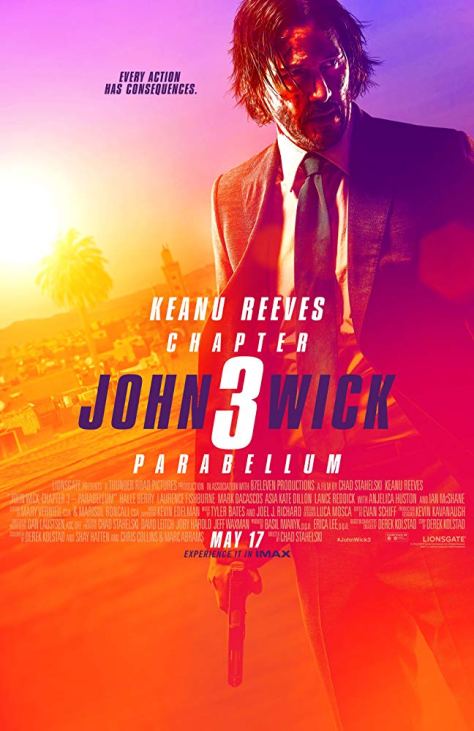 Written by Eric Brockett
(Eric is a millennial and thus thinks his opinion on the internet matters. Sometimes he has opinions on films too. He thinks people care. He knows they don’t.)