Disney’s latest live-action remake, Aladdin, thrives on the performances of the leads, but is that enough?

After finding success in Maleficent, Alice in Wonderland and Jungle Book, Disney has been moving full steam towards adapting their entire animated library into live-action films. This year already saw the release of the Tim Burton directed Dumbo, and later this summer we’ll get Jon Favreau’s The Lion King. But this weekend brought the release of the Guy Ritchie directed musical, Aladdin. Ritchie has never really been one for family fare, and has never once gone near a musical. His films are usually darker stories about those living in the shadows or as outcasts from society. Having Ritchie attached made for a lot intrigue, and excitement, but fans became nervous when the first image of Will Smith as the Genie came out online. Since then, fans of the original film have been holding their breath as to how this would turn out, and honestly, it’s better than expected.

The film doesn’t change any of the major details from the original film. It only removes one small song, and in fact adds a lot more music to the story. Jasmine is given her own song and a reprise that is award worthy. Jasmine’s entire arc is actually one of the biggest highlights of the film. In the original film we see her rail against her father’s desires for her to be married to a prince, while he fears he’ll pass before she finds a worthy suitor. The animated film doesn’t scratch much beyond the surface of her desire to simply choose what she wants. This film gives her struggle more weight as she desires to be the Sultan herself. Jasmine shows throughout the film that she has everything it takes to take her father’s place, but proving that to the world around her isn’t the easiest thing in the world.

Naomi Scott does an amazing job as Jasmine, and her performance makes the film just as much hers as it is Will Smith’s or Mena Massoud’s. Speaking of Massoud, he embodies Aladdin in every single way possible. He’s charming, he’s funny, he’s sweet- we see every great thing about this character and as he struggles to tell Jasmine the truth we never hate him for what he does. Massoud does an amazing job of making the character completely sympathetic and while we don’t want him to lie to Jasmine, and we don’t want him to go against his promise to Genie, we understand how he got there. When Genie begins to warn him about the dangers of the power from the wishes, it’s not just a wakeup call to Aladdin, it’s a wake up call to us. We’ve become so hooked into everything Aladdin’s doing that we think maybe he’s going to do the right thing. But Genie helps bring us back to center and realize, no Aladdin does need to reveal the truth of who he is before it’s too late.

As for Genie, Will Smith is perfect. Any hesitation for him taking over the role is completely out of mind. He nails every single moment of the character, and creates a version of the Genie that not only honors what came before but gives his own perfect spin on things. It’s the exact right mix of how the role should be portrayed and it’s a good example for how these films should work. There needs to be a balance of nostalgia and new, and Genie is the epitome of how that can work well. We walk into the film excited to see a version of this character we fell in love with in 1992, but we leave completely smitten with Smith’s take of the character. It’s new and fresh and delightful in every way it should be.

The biggest highlight past the cast of the film is undoubtedly the music. This is a full on musical, with almost every single original song in tact and more added to help bulk up the entire film. This is the aspect that Disney needs to follow moving forward. These films can become something greater than just a “live action remake” if they embrace the opportunity to be great musicals. A genre that was once a powerhouse in film, and has become a rarity the past 50 years or so. Aladdin is the first of the “live action remakes” to truly embrace it, and Ritchie and the team behind the film were right to do so. The film becomes something bigger, brighter, and more entertaining than some of the previous Disney remakes because of it. Hopefully we’ll get something similar with this summer’s Lion King.

Overall, Aladdin is a beautiful, funny, heartwarming experience, and one that I truly loved more than I ever expected to. There are a few times where it does lag a bit. Partially due to knowing how the original played out. But it makes up for those moments in droves. If you’ve been turned off by the live-action remakes so far, I recommend giving this one a shot. If nothing else Jasmine’s song and it’s reprise are worth the price of admission alone.

Aladdin is currently in theaters. 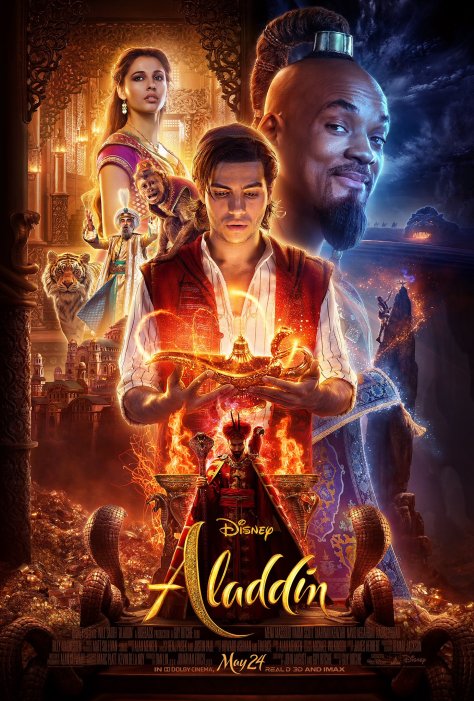