Biopics about musicians tend to be a dime a dozen. Their value ranges from cheap made-for-TV movies that sacrifice any depth which push the featured artist into a recycled trope filled story, to elaborate and in-depth character pieces that are worthy of our attention. While no biopic is perfect in its representation of the events that occur, there are some that stand out and tell a story that truly represents the artist themselves. Director Dexter Fletcher has crafted a nearly perfect biopic, and a beautiful representation of Elton John with his film Rocketman.

The film features Taron Egerton as Elton John, and begins with Elton walking into a group therapy meeting in a bejeweled red and orange jumpsuit with enormous feathered wings and a devil horned cap. He doesn’t want to be there, but he needs to be, and he seems to realize that even in his resentment. From here the film travels back to Elton’s youth as Reginald Dwight, the shy little boy living in a broken home. We see Reggie slowly grow to become the Elton we all know and love, along the way facing troubles with family, alcohol, cocaine, and lovers.

The film isn’t afraid to show us Elton or his one time manager and lover John Reid (Richard Madden) in the throws of a sexual relationship. It never shies away from the fact that Elton is gay, and embraces that element, something which isn’t typical of big studio releases. The film also strays away from hitting the usual tropes that you would expect from a musician’s biopic. There’s the usual ups and downs, but the way in which their presented is different. The tension between Elton and those around him is kept internal, and when Elton lashes out in moments of darkness, you have to step back and process why he’s doing this.

The film does a great job of never making a complete villain of anyone in the story. Even when John Reid betrays Elton, and says that he’s just following the “rock and roll lifestyle,” the film doesn’t give us enough time to start to despise him before he begins helping Elton keep things together. At which point we can see that Elton needs John for now, as he tries to stay afloat. Every character in Elton’s story plays into his life in this way. We constantly worry that he’ll have a moment where everything comes crashing down, and his relationships are torn apart completely. But even when there’s tension and turmoil, things still keep going. When he does blow up at Bernie Taupin (Jamie Bell), his longtime writing partner and best friend, he immediately apologizes and there’s no real animosity between them.

Overall this isn’t a cautionary tale about the pitfalls associated with fame, and it’s not an exploration of the horrors of addiction. This is a film about the way in which we deal with trauma, and how we carry it throughout our lives. Elton continues to put on masks and wigs to help hide himself, and keep the truth of what he’s feeling deep within. He’s able to skate by without acknowledging his inner turmoil, riding on the highs of fame. But at some point, the demons within us, and the darkness within our past will become too much. There will come a time when we have to decide if we want to fight for our lives, or if we want to keep wearing a mask.

Rocketman is a beautiful look at the life of Elton John, and the realities of dealing with trauma and mental health. It’s a film that isn’t afraid to shy away from anything involved in Elton’s life. Taron Egerton gives an award worthy performances as Elton. Jamie Bell and Richard Madden should be recognized as well for their portrayals of Bernie and John. There are few times where a film can rip your heart in two and the next moment have you dancing in your seat. But Rocketman accomplishes all of it in the same way that Elton John’s music can. It’s a worthy biopic of one of the greatest artists that’s ever lived.

Rocketman is currently playing in theaters. 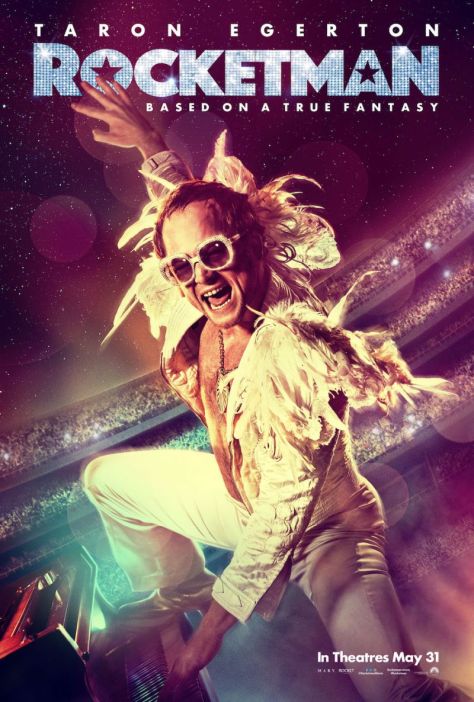