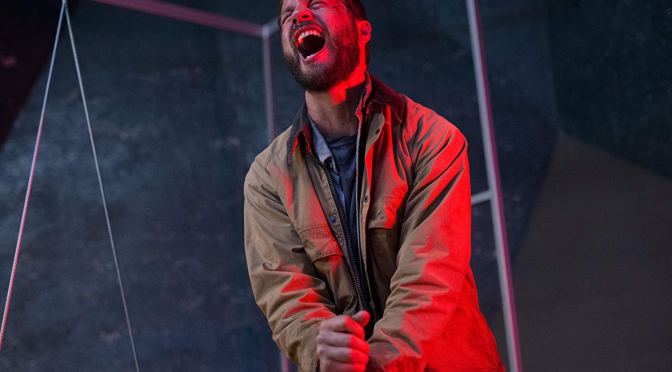 Teague is back with a look at the 2018 film Upgrade.

If you know me, then you might know that I hated the turd in the wind that Sony pooped out and marketed as Venom last year. It was poorly paced, shot, directed, and not even Tom Hardy could save that script. In my opinion, they completely squandered one of the most iconic villain/anti-hero comic book characters of the last thirty years. Yet, somehow Sony still managed to rake in boatloads of money, in total grossing $856 million worldwide during the film’s theatrical run, despite reactions from those like me who were sorely disappointed with the product. On Rotten Tomatoes (at the time of writing), the established-film-critic-driven Tomatometer is sitting at a whopping 29%, while the Audience Score is somehow at a mind-blowing 80%. I’m normally not on the side of the established film critics when it comes to how I “grade” films, and I feel the Chris Stuckmanns of the industry can be overly harsh at times. Honestly, some other critics come off as pretentious in their reviews and even sometimes resort to focusing on aspects of a film that are not its focal point simply for the justification of a hot-take clickbait headline. But when it came to Venom, I found myself agreeing that it was a stinker. I legitimately do not understand how anyone could come away from watching the film and not be at least frustrated by it. It isn’t the worst movie ever made, I will grant you, but what makes me so frustrated is knowing that it could have been something great but wasn’t. Instead of learning from the success of R-Rated comic book films like Logan and Deadpool, Sony played it safe and went with a PG-13 rating, made some quippy jokes here and there, and never made Venom seem too bad of a guy (or alien or whatever). Eventually my anger about Venom subsided and life moved on. That is until tonight, this chilly stay-at-home-and-watch-movies kind of night, when I came across Blumhouse’s 2018 action/body horror film Upgrade while browsing HBO Now’s streaming library.

Upgrade released in June of 2018, four months before Venom. It tells the story of a man named Grey Trace who is left paralyzed after he and his wife are mugged and shot. But an Elon Musk-type inventor offers the Grey an AI implant which will enable him to regain the use of his limbs. To Grey’s surprise, the AI begins to talk to him and gives him heightened abilities that enable him to investigate the reasons behind the mugging that took so much from him. Reviews were largely positive during the theatrical run for Upgrade, but there was very little marketing push, and the film ended up grossing just $14.3 million worldwide – still a success for Blumhouse, however, as it nearly tripled its fairly-low budget of $5 million. I cannot recall seeing it as an option at the AMC near where I lived at the time, so perhaps it wasn’t available in the Indianapolis market. Regardless, I unfortunately missed this one in theaters. But from my couch, I was still able to enjoy the hell out of it tonight.

Upgrade  is everything I wanted Venom to be, and it isn’t afraid to risk a dark ending (muahaha). The acting is at least serviceable, and the lead actor, Logan Marshall-Green (Spider-Man: Homecoming, Prometheus), even looks a good deal like Tom Hardy. But in this film, the acting takes a back seat to the action; the fight choreography is impressive and well-shot with brutal endings to most encounters. It doesn’t pull punches (wah woh) where Venom does and doesn’t shy away from the viciousness. There are no poorly-lit, foggy frames where you can’t decipher what you are looking at, and when heads are removed from their bodies, there is no panning away. (Spoiler alert for the weak-stomached out there. You may want to skip the flick.) Not to say this is a straight up gore-fest, but when those moments occur, little is left to the imagination. The story is a bit predictable, but the scenes along the way to the end are super fun.

I couldn’t help myself from comparing this film to Venom, and I honestly feel like it is closer to the kind of story we should have gotten from Sony. The dynamic of Grey and the AI is what the dynamic of Eddie and Symbiote should have been. There are multiple scenes where Grey struggles with his newfound power and the consequences of going too far, and the horror elements of possibly losing control to the power add suspense to the action, which Venom lacked. In “Upgrade,” the AI at first seems to be a helpful saving grace, but becomes potentially more sinister as the film progresses. In Venom, they take a reverse course, and the concept of the symbiote being evil is quickly abandoned and exchanged for the idea that it is really just a loser alien who wants to help the beings on the planet it was originally going to take over for… reasons? Because of Eddie? He likes him or something? F&@#ing garbage… I can’t help but think of what could have been. I mean, symbiotes are a scary concept! But can’t pursue that too deeply and get into the dark side of it because then we can’t sell toys and t-shirts!

Alright, off my soapbox. My point is: Upgrade > Venom and should have achieved all of the financial success instead. I want to see a sequel for Upgrade but probably won’t. But I’m sure we’ll get more turds from Sony besmirching Spidey’s most badass villain’s name. I highly recommend Upgrade and am glad I chanced upon it.

Written by Chad Teague
(Chad is a writer and real-life antagonist to Poor Man’s Spoiler founder Alex Lancaster. Chad doesn’t always agree with the popular view of things, but he always has good reason behind his views. His favorite film is The Shawshank Redemption, and don’t get him started on how much he hates Venom.)