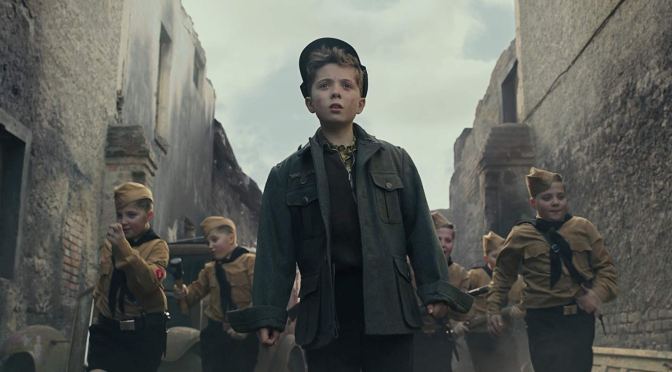 When I went into this film, I expected it to be a topical satire drawing allusions between the Nazi regime and our current presidential administration. What I saw instead was a love letter to all those who feel that the only way they can get through life is to step on the backs of others. A letter to the essence of humanity in us all, the culminating factors that bring us together and make us all the same. A calling to those with hate in their hearts to leave that pain and seek love instead. This film very easily could have been a romp against authoritarianism or Nazis; just the same sort of stuff we’ve seen in sketch comedies several times. Does it have elements of that? Of course, as it should, but there is an essence of something more substantial underneath that keeps it from being a farce.

That is not to say that this film isn’t going to make you laugh. This film is as funny as it is smart with the way it brings in the humor. A lot of what you see in the trailers lean more towards the beginning of the film. Director Taika Waititi juxtaposes a child excited for camp with our understanding that Nazis are bad. You can tell from how excited JoJo (Roman Griffin Davis) is as he runs down the street heiling Hitler to everyone he passes, that he is just a kid – a kid that possesses all the innocence and excitement that one his age should to go to camp. He gets to play with his friends, gets a cool knife, and learns about how he can “help” with all the problems in the world. Who wouldn’t want to be a part of something to help change the world?

Sam Rockwell is tremendous in this movie. You can feel the nuance of a character that feels left out, but also one that doesn’t really believe in the system he is part of. Someone who feels more like a babysitter than a member of the army. Plus, he is wonderfully flamboyant in a way that doesn’t steal attention when it isn’t necessary, but also feels genuine within the world of the movie. Alfie Allen is almost unrecognizable as his partner. The weakest of the supporting cast is Rebel Wilson, who just plays Rebel Wilson if Rebel Wilson grew up under the Nazi regime. A feeling of legitimacy is lacking in her performance that was ultimately distracting compared to everyone else. It felt like a joke that we were all supposed to be a part of, but no one was laughing.

Scarlett Johansson’s character is interesting and I have trouble describing it other than saying it was exactly what is needed for her role. Is it game changing? No, but she does well enough. Her role is what holds the other characters together. She is determined, empathetic, and nurturing to both of the young leads of the movie. Allowing herself to mainly be a sounding board for the thoughts these characters feel the need to express. The role is multifaceted as she has to be a loving mother to a monster of a kid she admits has problematic tendencies, support a Jewish child that is not her own, all the while risking her life and her son’s. I do not envy the challenge involved for her character, but am appreciative of the result in her performance. Without such a performance, the climactic points of this movie would not have paid off.

The most controversial part of the movie is Watiti himself playing Adolf Hitler. Some claim that you humanize the monster he was and make a laughing bit of a man who committed atrocities. Watiti does not play the Adolf Hitler, but a superhero-esq creation from the imagination of a young boy. I say superhero purposely, as it is more like a boy who looks up to Batman or Spider-Man. Jojo creates rules and stipulations to make his hero the epitome of the ideal German. He is the moral compass for Jojo and it works brilliantly with Jojo having a physical representation of his internal struggles. It doesn’t make light of the tragedy nor does it excuse it, merely holds a mirror up to Jojo to measure his worth, and ultimately, if that matters.

I don’t consider this a spoiler to anyone except this one guy in my sophomore English class that really misunderstood Nietzche and thought that Goebbels was a dapper man…Germany lost WWII. We know this. Watiti knows that you know this. This movie challenges your understanding of those events as much as it challenges the characters’ preconceptions. Parts or it will make you laugh, parts of it will make you cry, parts of it will mend your heart. The portrayals of Jojo by Roman Griffin Davis and Elsa by Thomasin McKenzie are the driving force of this movie and, thankfully, both give great performances, led by a great director in Watiti. It’s probably the strangest coming of age tale since Moonrise Kingdom, and like that movie, I would highly suggest giving this movie a watch while you can.

Written by Eric Brockett
(Eric is a millennial and thus thinks his opinion on the internet matters. Sometimes he has opinions on films too. He thinks people care. He knows they don’t.)