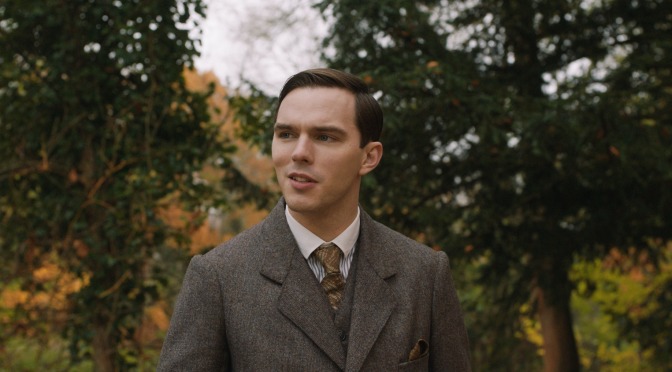 Tolkien centers on the college years of the famed writer of The Lord of the Rings.

Last year, Fox Searchlight released the biopic Tolkien, which gives us a look at the life of John Ronald Reuel Tolkien. Tolkein became known worldwide for his fantasy works The Hobbit, The Lord of the Rings, and The Silmarillion. The film begins with Tolkien’s childhood as him and his brother are sent to live with Mrs. Faulkner (Pam Ferris), a wealthy woman who also cares for a young woman named Edith Bratt. As they grow older Tolkein and Edith fall in love. Eventually Tolkein’s legal guardian, Father Francis Morgan (Colm Meaney), forces Tolkien to leave Edith or give up his chance to go to Oxford. As Tolkien heads to college he begins a path that eventually leads to the creation of his well loved works.

The film is framed by Tolkien’s time in WWI as he searches for his friend Geoffrey Bach Smith (Anthony Boyle), believing he can hear him calling out for Tolkien. As he searches for his friend, the film jumps back to his childhood and his years in college with his group of best friends. It also touches on the relationship with Edith and how the two fell apart. Eventually everything in Tolkien’s life is upended with the start of WWI.

Going into any further detail would spoil the framing of the story, but the film does a great job of showing how Tolkien got to the point where he became J.R.R. Tolkien. The film also does an excellent job of using the production design to push the idea that the world around Tolkien greatly impacted his works. The moments of war lean heavily into the battles from his stories, but it’s also visible in the rest of his life. Walking through trees and grass with an older man he respects greatly. Watching the woman he loves dance in the angelic light that shines between the tree branches. The film does a lot to push the influences into center stage.

The film is an entertaining biopic, but it does lag a bit in the second act of the film. After we’re introduced to Tolkien and those close to him, and it moves into his college years, the film almost seems like it doesn’t know how to get to the end. When it finally does arrive at a point where we drive straight into the final act, things move so quickly that it feels unbalanced. We’re left wanting more details in the end, as the film seems to jump forward in ways that fit some aspects of the story being told, but ignores the progress of half of the plotlines. It gives us enough to know what we absolutely need to, and not much more.

Tolkien is an interesting look into the life of a man who created some of the greatest fantasy stories. The production design and acting, especially that of Nicholas Hoult as Tolkien, are phenomenal. But the film would have held more of an impact if it gave us more details to how things moved from one point to the next. J.R.R. Tolkien wrote expansive stories that detail long journeys, where we knew exactly how and why things happened. Sadly his biopic doesn’t exactly follow that same path.

Tolkien is currently available on HBO.