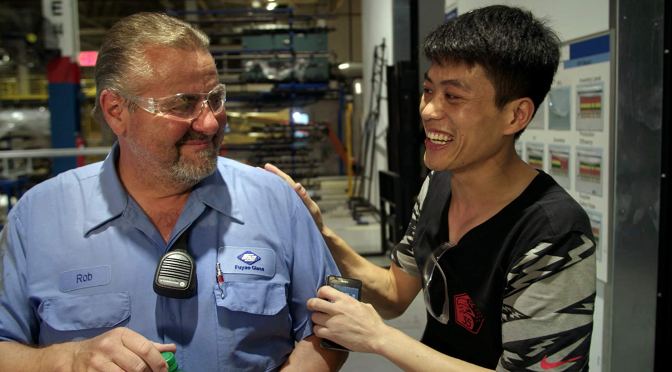 There are many ways of going about a documentary. Some will have talking head interviews with people who were directly related to the subject the film focuses on. Some documentaries will focus on a subject and include the path the filmmakers took to explore the subject at hand. Others give you a look into the details of a situation or person, without any sort of editorial commentary. American Factory falls into the latter category, documenting the Fuyao Glass factory that was built in Moraine, OH.

In a way the film can be summed up in one simple sentence: after the closure of a major GM plant Fuyao glass (a Chinese company) opened a factory in Moraine, OH, quickly facing difficulties with US labor customs and a vote on implementing a union, the company now looks towards automation. Overall that covers the full scope of the story here, but where the film excels is in the human aspect of the story. By using the “fly-on-the-wall” style, the film spends it’s time showing how all of these events affected the workers, and how the higher ups at Fuyao worked to find success with the plant without larger conflict.

The film does a great job of empathizing with everyone involved. From the workers in the factory to the CEO of Fuyao, Cao Dewang. It takes it’s time to show that each side sees the differences in their cultures and wants to find success by melding everything together in some sort of cohesive way. For those living in Moraine, this factory is a chance to have a fulfilling life again, after many people lost their jobs with the closure of the GM plant. For Fuyao and the Chinese men and women who moved to Moraine to work at the plant, this is a chance to start bringing more work to the US- something that could greatly benefit all of China.

There’s a struggle within the film that isn’t stated but is clearly there, one of big business damaging the lives of good people. Fuyao’s and the men who lead the company, worry more about the production at the factory and the success of the company. That focus leads them to fight against the workers attempting to unionize, and eventually implement automation, which removes more jobs. The film doesn’t pain Fuyao or it’s CEO Cao Dewang in a wholly bad light, but the implications are there and they are obvious. The company came in promising to help create jobs and within two years have done an equal amount of harm as they have good.

Companies can find ways of succeeding without stepping on those who yearn for a good life. There is no reason to put people in harsh working conditions and make their lives more difficult- or put their safety at risk, just for the sake of potential success. Business thrived for decades because we used good people who were dedicated to their work. But corporate greed has blinded the people at the top into pushing for more money, at the risk of anyone below them. It’s corrupted the American Dream and the way of life in this country, and is leading to a world full of automation.

American Factory holds a powerful message, but the filmmakers never truly dive into that message. The film is worthwhile for the human element within, but it does little more than give you an extended news piece that you may see on any 11:00pm local news. In a day and age when big businesses are taking advantage of people, and throwing them to the site for their own gain, there’s plenty of good material inherent in this story. But the film takes the easy route of simply showing the events taking place and never once commenting on them in any significant way.