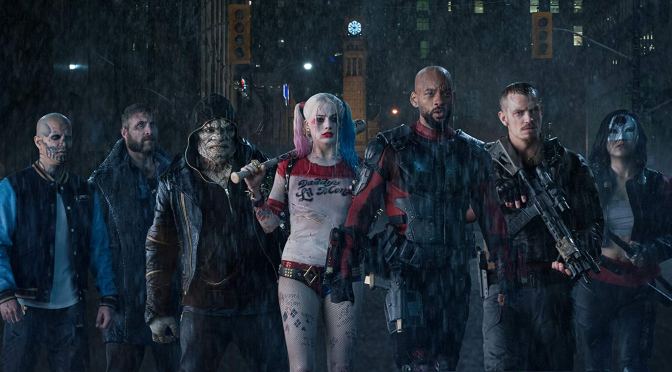 With Birds of Prey hitting theaters this weekend, we’re looking back at the entire DCEU. Today we’re moving along with a look back at Suicide Squad.

Batman v Superman was a film that had good elements and some great scenes but was put together poorly and felt overstuffed. Warner Brothers’ and DC’s follow up to BvS, Suicide Squad, seemed to learn no lessons from the faults of BvS and is a film that at times is hard to even take in. There are good elements hidden within; the casting is fantastic, the fact that we get to see most of the characters involved is something almost unimaginable, and there are a few sequences of the film that do play well,  but the handful of good things aren’t enough to sustain the film.

The biggest problem facing the film is the way in which it bounces from trying to tell a decent story to trying to play into moments that the film (and its editors) think fans want. The dialogue honestly doesn’t help the situation, but in all likelihood, the takes used within the film are ones that director David Ayer likely wouldn’t have chosen for the final cut. Having five different times where the anti-heroes of the film point out that they’re the bad guys doesn’t seem like something any good director would include.

In terms of dialogue, the film often goes back to the same points again and again or rests on clichéd one liners more and more as it heads to its conclusion. The worst example of this is in the final battle in the third act of the film: the plan for taking out the villains is explained three times to everyone involved, and despite having seen the villains before, Boomerang still says, “What is that?” Moments like that are things that feel as though they were forced in to get specific scenes included into this cut of the film.

It’s incredibly evident that Ayer lost control of this film in post production and that WB and DC decided to take control, sacrificing any decency Ayer had injected into the film. There are clues to where his story led. The scenes between Deadshot and Harley are a good example of this. The subtle subplot between them as they both try to decide if they can be good people is one of the major highlights of the film. The storyline for Diablo is a great example as well, with his arc being quite possibly the only solid thing throughout the entirety of the film.

The only thing that possibly saves Suicide Squad is the fact that it’s a film that you can go into, shut your brain off, and just kind of enjoy a bit. It’s a cheesy “B movie” made from the chopped-up remains of a better film. The flaws are ridiculously evident and hard to shield away from, but there’s enough within the film that will at least keep you entertained. No one is going to say that the movie is high caliber filmmaking because of the end result, but it’s at least something you can find some slivers of joy in.

Suicide Squad is currently available on DVD, Blu-Ray and Digital. Be sure to keep following us throughout the week as we continue looking back at the DCEU, leading up to the release of Birds of Prey this weekend!